You are here: Home / Blog / Here’s to the real you 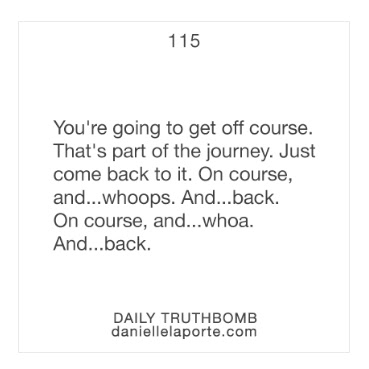 I love that. I love anything that reminds me that I have permission to mess up and I always love a good Go Ahead And Mess Things Up permission slip from hot mama Danielle.
But.
Today is not going to be about mess-ups, no ma’am, because today, we’re talking about Jian.
I listen to Q with Jian Gomeshi almost everyday, 99.1FM on the car radio on my way home from the gym.  My husband, Jack, knows that I have a big crush on this guy’s voice and over all talent.  The smart brain behind the soothing sexy voice is a turn on, he’s got this velvety, mellow tone and bonus points for him being funny and witty and cute!
He does get a mood going some days and I catch that. (You should see this one interview with funnyman Russell Peters where I thought at some point they were going to slug it out right there on the screen…so much tension and undercurrent and testosterone. Whew!  Or maybe that’s just me.  *wishful thinking?*) But, see, I respect him more for being authentic about it. Done are the days of the automaton announcer with the agreeable, bobbing head and monotone voice, thank you very much.

Anyhoo, Jian and I – yes, we are on a first name basis and when he interviews me on the show someday I will gush about this again – have lots in common.  Well, sorta.  We’re both immigrants.   His parents are Iranian and they moved here to Toronto from London.  My parents are Filipino and although they didn’t move here, I did along with my husband and kid.  We both love music and the details behind the songs (rock for him, classical and pop for me) and most importantly, we both think that perfection is overrated.   (I can’t wait to tell him about my 100im.perfect.songs project!  One day…one day soon!:))
The last bit about perfection made official my Crush Connection with my Radio Romeo. On this short, barely four minute blog, he shares his opinion on how Beyoncé unnecessarily (allegedly) lip-synched the National Anthem during President Barack’s Inauguration and in his words (Jian’s, not President Barack’s) ~

“We’re obsessed with perfection…the quest for perfection pervades nearly every aspect of our lives…and yet perfection does not reflect the natural state of things. Imperfection is the far more common condition…and possibly, the more attractive disposition. But we’re frightened of our flaws, of the very thing that make us human. But, hey, wouldn’t it be okay to hear a bit of a blue note, or a little waver at the towering crescendo of the Star Spangled Banner and a few less meticulously tuned vocal gymnastics….”
Gush. I love a guy who is a manly man (I think?) yet can shift to a heart-centered, more emo*full state in the same breath.  Now, now, notice how Jian takes a breath in the oddest yet cutest points in his sentences?! *more swooons*
See, here’s what I’m saying ~
The old stereotypes are now broken, thank You, God. The mainstream media is now beginning to embrace imperfection more and more. The old standard pitch-perfect, glitch-free, Simon Cowell approved renditions of songs is no longer the only preference (As long as you don’t sound like Russell Crowe in Les Mis, that is!) and the macho man persona is dead. Hallelujah! I’ve been praying for that one for decades!
With authenticity as the new cool and passionate enthusiasm, the new hip, I believe we are coming into heaven on earth and the whole End of the World (as we know it) circa 2012 could have been the best thing that ever happened to our species of late!
And with a few more words from my cutie pie, Jianiepie, before I go ~
“Here’s to imperfection. To the flaw that makes things beautiful. To the magic that comes from the unexpected…”
Here’s to the real YOU,
Chiqui
DailyTruthBombs are owned by Danielle LaPorte.
Q with Jian Gomeshi rights owned by CBC Radio, 99.1FM, Toronto.

Artist. Singer. Photographer. Writer. Broadcaster. Wife to Babalicious. Mom to The Scientist, The Artist and The Chef. Likes yarn and Ordinary Everyday Magic.

This article first appeared as a feature in  Manila Bulletin’s Picture Perfect dated May 28, 2013.